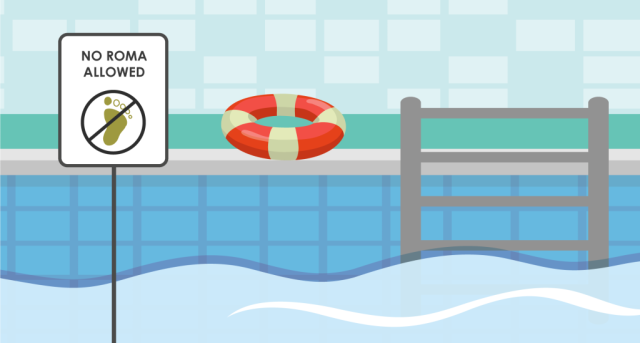 In July 2022, Asociatia Speranţă și Zâmbet (Hope and Smile Association) organized a group trip to the Aqua Fun Swimming Pool in Sibiu, Romania, as part of their summer holiday program for disadvantaged Romani and non-Romani children and their families. However, the group of 30 children and 15 adults were not allowed to enter the swimming pool, based on the directions of the pool’s management. The pool manager later stated in an interview with local media that he no longer welcomes Roma people at his swimming pool.

As the European Roma Rights Center’s article notes, “The denial of Romani children to the swimming pool in Sibiu represents a continuation of a racist trend which is usually so common as to not even register publicly with news coverage in Romania.” This particular case was brought to the attention of the ERRC by the local NGO, RomaJust. The Romani families who were discriminated against were offered legal representation, and the case was brought to the National Council for Combating Discrimination. The Council made its decision at the end of 2022, and ruled in favor of the Roma families. The Council declared that the swimming pool had discriminated against the Romani children. As a result, the Aqua Fun Swimming Pool was fined 10,000 lei (€2,030).

“We hope that this decision of the National Council for Combating Discrimination will serve as a warning in the future to all those who believe that discrimination remains unpunished,” said President of RomaJust, Eugen Ghita.

For more details, please visit the website of ECCR.